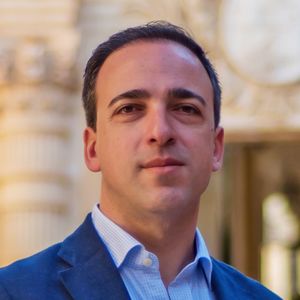 Alan Chircop’s repertoire is very wide ranging and apart from an extensive symphonic and concerto repertoire, he has directed several opera productions and contemporary music premieres.

In 1993 he obtained the Diplome de Fin d’Etudes in pianoforte with distinction at the Conservatoire Regional de Musique in Lyon (France). He pursued his studies at the Felix Mendelssohn Bartholdy Music Academy in Leipzig (Germany) obtaining two Masters Degrees: in Pianoforte under the tutorship of Prof. Christoph Taubert (1994-2001) and Orchestral Direction with Prof. Gert Bahner (1997-2003). He also followed a one-year specialization course in Orchestral Direction with Prof. Uros Lajovic at the Hochschule für Musik in Vienna (Austria).

Alan Chircop was also the Founder and Principal of the Euro Academy of Music and Arts in Malta (1997-2007); Artistic Director of the Virtuoso Classics Concert Series (2003-2005); and Artistic Director of the Renaissance Cultural Foundation (2006-2008). In 2009 he was appointed Advisor to the Government of Malta for Music Education and was Principal of the Visual & Performing Arts Schools within the Ministry of Education.

He is also the Artistic Director of the European Foundation for Support of Culture and often serves as jury member of international music competitions.