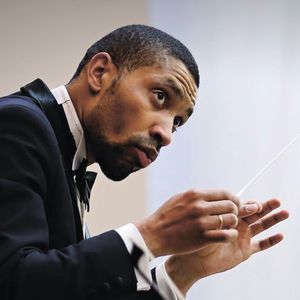 Aleksei Niaga was born in 1979 in Leningrad. He received his primary musical education at the Choir School named after Mikhail Glinka. In 2002 he graduated from the St. Petersburg Сonservatory with a degree in choral conducting (class of professor Kudriavtseva). Aleksei is a laureate of the II Prize at the International Competition of Choir Conductors named after Aleksandr Yurlov (2001). He continued his studying at the сonservatory for opera and symphonic conducting (class of professor Titov).

In 2007 he began to perform at the season-ticket concerts of the St. Petersburg Philharmonic with almost all the leading symphony orchestras of the "northern capital", conducting both classical and contemporary music (including film music).

In 2007 he started working at the Mikhailovsky Theatre as a choirmaster and since 2011 as a conductor. Aleksei conducted opera and ballet performances "La Traviata", "Eugene Onegin", "Mermaid" (Antonin Dvorak), "Nutcracker", "La Sylphide". He staged a one-act ballet "Invisible" to music by Andrzej Panufnik and choreography by Nacho Duato as a music director.

In 2014 he took part in staging Tchaikovsky opera “The Enchantress” at the Theater an der Wien (Vienna, Austria) as an assistant conductor.

Since October 2014 Aleksei Niaga has been a conductor of the Karelian State Philharmonic Orchestra.

The repertoire of the conductor includes more than 20 opera and ballet performances.