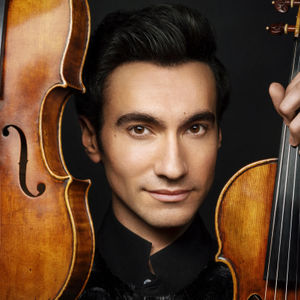 Recipient of the 2011 Leonard Bernstein Award, First Prize Winner of the Walter E. Naumburg Viola Competition and the 2010 Avery Fisher Career Grant, David Aaron Carpenter is widely considered one of the most talented and charismatic musicians of his generation.

Recently called “the hottest violinist of the 21st century” by the influential music critic Norman Lebrecht and “stunningly talented” by The New Yorker, David is also a former Rolex “Protégé” for which he was mentored by Pinchas Zukerman. David made his solo debut at the Kennedy Center in 2002 after winning the Presidential Scholar Award and the first-ever Gold Medal Award at the National Foundation For Advancement In The Arts. Since then he has performed with leading musicians and orchestras around the world, from the Philadelphia Orchestra to the Philharmonia, the Dresden Staatskapelle to the Lucerne Symphony. In May 2013, David played the Schnittke Viola Concerto at Carnegie Hall and the Kennedy Center with the National Symphony Orchestra under the baton of Christoph Eschenbach. The concert was a musical tribute to the great cellist and conductor, Mstislav Rostropovich.

David’s first recording, released in 2009 and featuring his own viola arrangement of the Elgar Cello Concerto (after Lionel Tertis) and the Schnittke Viola Concerto with Eschenbach was an international success, winning the coveted ‘Editor’s Choice’ accolade from Gramophone. His next disc featured Berlioz’s Harold in Italy and Paganini’s Sonata per la Grand Viola with Vladimir Ashkenazy and the Helsinki Philharmonic Orchestra. His third album, a world premiere recording of the recently rediscovered Viola Concertos of “the Swedish Mozart” Joseph Martin Kraus, was released in 2012. The fourth album with members of the Berlin Philharmonic Orchestra. “Making music with these incredible musicians,” he says, “has been one of the inspiring highlights of my career.”

As a chamber musician, David has collaborated with such renowned artists as Yo-Yo Ma, Emanuel Ax, Sarah Chang, Leonidas Kavakos, Gidon Kremer, Alan Gilbert, Julian Rachlin, Dmitry Sitkovetsky, Jean-Yves Thibaudet, Jan Vogler, and Yuja Wang. He is a regular guest artist at the Verbier Music Festival, and was proud to be an integral part of their 20th anniversary season.  David plays on a viola made by Michele Deconet, Venice (1766) known as the “Ex-Hamma,  King David.”  He is currently the Artistic Director of the New York-based Salomé Chamber Orchestra, which he co-founded with his brother Sean and sister Lauren. The Orchestra inaugurated the annual Salomé Music Festival at The Hamptons in August 2012, where David played in the opening concert alongside singer-songwriter Rufus Wainwright.

In addition to David’s musical accomplishments (he studied for five years with the revered viola teacher Roberto Diaz), David received his Bachelor of Arts degree in Political Science and International Relations from Princeton University in 2008.  David was featured in The New Yorker article “Musical Gold” by Rebecca Mead in July, 2014, on the cover of The Strad magazine in August 2013, and a few months earlier was the subject of a three-page article in The New York Times.  Along with the Salomé Chamber Orchestra, David released his Warner Classics recording featuring Vivaldi, Piazzolla and Shor's Twelve Seasons. His newest release on Warner Classics features the Bartok, Walton, Shor and Dvorak Concertos with the London Philharmonic Orchestra under Maestros Vladimir Jurowski, David Parry, and Kazushi Ono.