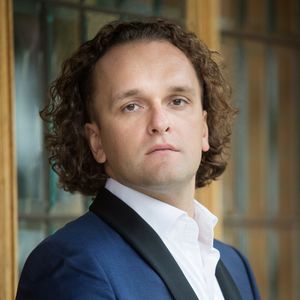 Conductor Yuri Medianik got his education in Russia (Moscow and Saint Petersburg). Over the years of education he gained a big success in performing arts: Yuri plays violin — graduated at Moscow Conservatory; he as well plays bayan (button accordion)— graduated from Gnessin Academy of Music; and also plays bandoneon — taking part in various TV- shows and concerts.

However, Yuri has chosen the conducting as his main direction in music. Yuri Medianik’s childhood was a bright kaleidoscope of concerts and tours — he's been taught music since he was 2 years old. His first tour happened to be, when he was just 10.

Yuri won 5 competitions as an accordionist and violinist. That’s an interesting fact, that his first record was made at his age of 14 years old, with Bochum Chamber orchestra (Germany). At his age of 15, he became an Honored member of Kaunas Conservatory (Lithuania).

Honored Artist of Russia Yuri Simonov. And gratefully, Yuri had the internship with Kurt Mazur.

Since 2014 Yuri Medianik has been conducting in Novaya Opera Moscow Theatre. There are more than 10 operas and concert programs in his repertoire. Concerts with Yuri’s participations are broadcasted on Russian TV-channels “Russia. Culture” and “Russia-1”. Such operas as “La Bohéme”, “Madama Butterfly” by Puccini, “Lucia di Lammermoor” by Donizetti, «Romeo et Juliette» by Gounod, "The Nutcracker Opera» by Tchaikovsky were performed under the leadership of Yuri Medianik. Yuri worked as an assistant conductor with Alexandru Samoilā (Moldova), Arthur Arnold (Netherlands), Jan Latham-Koenig (UK).

In 2018 Yuri has become the Principal Guest Conductor of First International Vocal Competition in DPRK.

One of many of the talents inherent by Yuri - is his ability to unite famous musicians in orchestras and ensembles. In such way in 2007 he became the founder of Pluri Art Orchestra. At the same year orchestra was one of the guests in the festival “Opera Ischia” (Italy”, participated in the performance of operas «La Bohéme» by Puccini and «Il barbiere di Siviglia» by Rossini. In 2008 in Norway Pluri Art Orchestra performed the world-premiere of the composer Flint Joventino in Beppe. Since 2009 the orchestra has participated more than in 10 festivals in Moscow.

In 2016 Yuri Medianik became a founder and conductor of the VGTRK Orchestra. Where the abbreviation "VGTRK" stands for All-Russian Broadcasting Television State Company. The unique compound of the orchestra combines academic Instruments with drum-sets, guitars, synthesizers and brass-section. The orchestra performs music of different periods and genres, from Baroque opera arias till jazz and cross-over music. At its first season the VGTRK Orchestra became the main orchestra of TV-competition “Blue Bird”.

Until 2019 only this orchestra accompanies the participants.

The VGTRK Orchestra has expanded its repertoire almost to 200 pieces. The audience reached almost 80 million people and it made this competition and orchestra one of the most famous on Russian Television.

Besides all tremendous musical achievements, since 2017 Yuri Medianik is an ambassador of the beneficial fund “Be the human”.

The fund was created for the great purpose of helping children with heavy illnesses.

In 2019, he conducted a youth concert at the conductor's desk dedicated to the 90th anniversary of the poet Nikolai Dobronravov (broadcast on the channel "Russia. Culture"), as well as two concerts with Anna Netrebko at the State Kremlin Palace. In 2020, he was nominated for the National Music Award "Victoria" for the soundtrack to the film "Ice-2", recorded with the Pluri Art Orchestra. Since 2021 - Chief Conductor of the Nizhny Novgorod State Academic Opera and Ballet Theater named after A.S. Pushkin. Since September 2021 - Chief Conductor of the Black Sea Symphony Orchestra.

In 2021, he was promoted by the anniversary concert of Anna Netrebko on the stage of the State Kremlin Palace.

Yuri Medyanik is active in the media space. The Libertango video, in which he plays the bandoneon, received more than 50 million views at the beginning of 2022. In addition, Medyanik is the author of a series of educational programs Music Tips and "Secret Music Materials", dubbed in English and Chinese. Medyanik's recordings are presented on 33 streaming platforms in China.