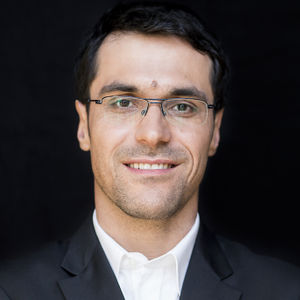 Critically acclaimed as “one of the great Bach interpreters of his generation”, Stepan Simonian is driven by a yearning to explore and illuminate the multiple facets of the great works of piano repertoire, particularly by Schubert, Schumann, Brahms, Beethoven, Mozart, and Bach.

His Silver Medal at the International Johann Sebastian Bach Competition in 2010, his training within a well-cultured piano school tradition at Moscow Conservatory under Pavel Nersessian, as well as with Oleg Boshniakovich, then with Evgeni Koroliov in Hamburg, all form part of the experiences that have marked his musical taste, his interpretations, and his teaching.

In recognition of his achievements in chamber music, he was awarded the prestigious Berenberg Cultural Prize in 2009 in Hamburg, where he has made his home. In 2014 he won Third Prize at the Aram Khachaturian International Piano Competition in Yerevan, Armenia.

Stepan Simonian is invited to perform at some of the most important festivals and concert venues throughout Europe and the US. He has appeared as a soloist with many national and international orchestras and conductors.

His début CD, a complete recording of J. S. Bach’s toccatas for keyboard for the GENUIN label, was highly praised by music critics. In 2018 the cpo label released Khachaturian’s Piano Concerto and Concert Rhapsody with the Rheinische Philharmonie State Orchestra conducted by Daniel Raiskin. In 2019 the Cologne label CAvi-music published Simonian’s second Bach CD: the Goldberg Variations, recorded in cooperation with NDR.

Since 2009 Stepan Simonian has been a tenured professor at his alma mater, the Hochschule für Musik und Theater Hamburg, where he lectures in solo piano performance.