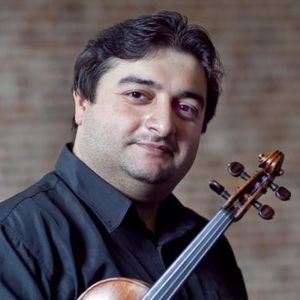 Graf Mourja is generally recognized as one of most talented and distinctive Hungarian-Russian violinists of his generation. He began studying music at the age of three under the supervision of his father. Then for two years, his teacher has been a professor at the Ural State Conservatory, Wolf Usminsky (Sverdlovsk). In 1982, Graf Mourja entered the Tchaikovsky Central Music School in Moscow, the class of Prof. Irina Bochkova. Even in school, at age of 16, he became the laureate and winner of two famous international competitions: Niccolò Paganini in Genoa (1990) and Vianna da Motta in Lisbon (1991), where he was also awarded a special prize for Chaconne Bartók. Graf Mourja graduated from Moscow Conservatory in 1997, and did his postgraduate studies under the supervision of Professor I. Bochkova in 1999. He was awarded the scholarship of the President Yeltsin, for his outstanding results in his studies. At the same time he finished his postgraduate studies at the Royal Academy of Music in London with Mateja Marincovich; he won the Hattory prize in London for outstanding achievements in his studying.

During his studies Mr. Mourja became the laureate and winner of numerous international competitions, among them: Demidov International Violin

The repertoire of the violinist is more than 30 concerts with the orchestra, among them are rarely performed works of E.Dohnanyi, H. Badings, G. Dmitriev, M. Nosyrev, B. Bartók, E.Lalo. Graf Mourja recorded 3 CDs for the company Harmonia Mundi, collaborated with Alpha, Integral, Hanssler-Verlag, Naxos, Chant du 1 Monde, Classical Records, Melodia. Recordings of works by Stravinsky, Szymanowskyi, Schnittke, Prokofiev, Ravel and the recording of virtuoso miniatures "Violin vagabond" were highly prized by "Strad" and "Gramophone" magazines, as well as the prestigious awards "Diapasond" Or "and "Choc" In 2013 in cooperation with ensemble “Kheops” he recorded the project with Dohnanyi and Penderecki sextets for the firm Fuga Libera (Belgium).

In 2004, G. Mourja was awarded the title "Honored Artist of Russia". Now Mr.Mourja is the professor of Moscow Conservatory. His master classes take place in the UK and France, Russia and Switzerland, Belgium and the Netherlands. Since 2005, Mr. Mourja has regularly invited the jury of Russian and International competitions. In June 2010, Graf Mourja won The Gold Medal - Grand Prix at the prestigious Violin Competition «Violin Masters» in Monte Carlo. Violinist plays violin by Alessandro Gagliano, Neapol, 1719. That was given to him in lifetime use by a philanthropist. During the last five years, Graf Mourja played 24 Capriccios by N.Paganini over 50 times.