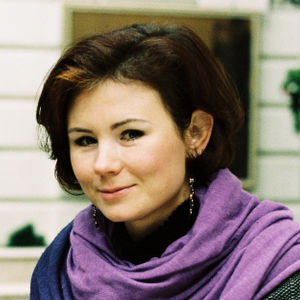 Svetlana Makarova was born in Moscow in 1981. She started to play violin at the age of 5 in a class of Honoured Artist of Russia Ludmila Egorova.

At the age of 10 she won the first prize at the Moscow International Youth Tchaikovsky Competition. Hereafter she won different prizes at numerous state and international competitions.

In 2005 Svetlana graduated the Moscow State Tchaikovsky Conservatory and in 2008 finished her postgraduated studies with professor M. Glezarova.

Svetlana actively plays and gives concerts as a soloist and as a part of different chamber ensembles.

She also made several CD recordings (with pieces of Tchaikovsky, Beethoven, Brahms, Shubert, Schönberg) as a soloist and as a member of chamber ensembles.

In 2005-2008 she was teaching at famous Gnessin's Music College in Moscow.

In 2008 she was invited by Prof. Vernikov to collaborate with him in numerous master classes in Italy, Israel and Austria.

From 2008 to 2011 she was co-pricipal in the Orquestra Palau de Les Arts Reina Sofia in Valencia (Spain), where principal conductors were Maestri L. Maazel and Z. Mehta.

Since 2010 she teaches at the Scuola di Musica di Fiesole in Italy.

Until 2013 she worked as an Assistant of Prof. Pavel Vernikov at the Haut Ecole de Musique de Lausanne (Site de Sion) in Switzerland and at many Master Classes in Austria, Italy, France, Switzerland and Japan.

She also performed as a violinist at many festivals in Austria, Italy, France, Switzerland and Japan.

Since 2014 she works as a Professor for Violin at the Haut Ecole de Musique de Lausanne in Switzerland.

She plays a violin by Nicola Gagliano made in 1738.