September 4 marked the beginning of the intensive three-week project, with 28 renowned professors and musicians delivering masterclasses in the region. 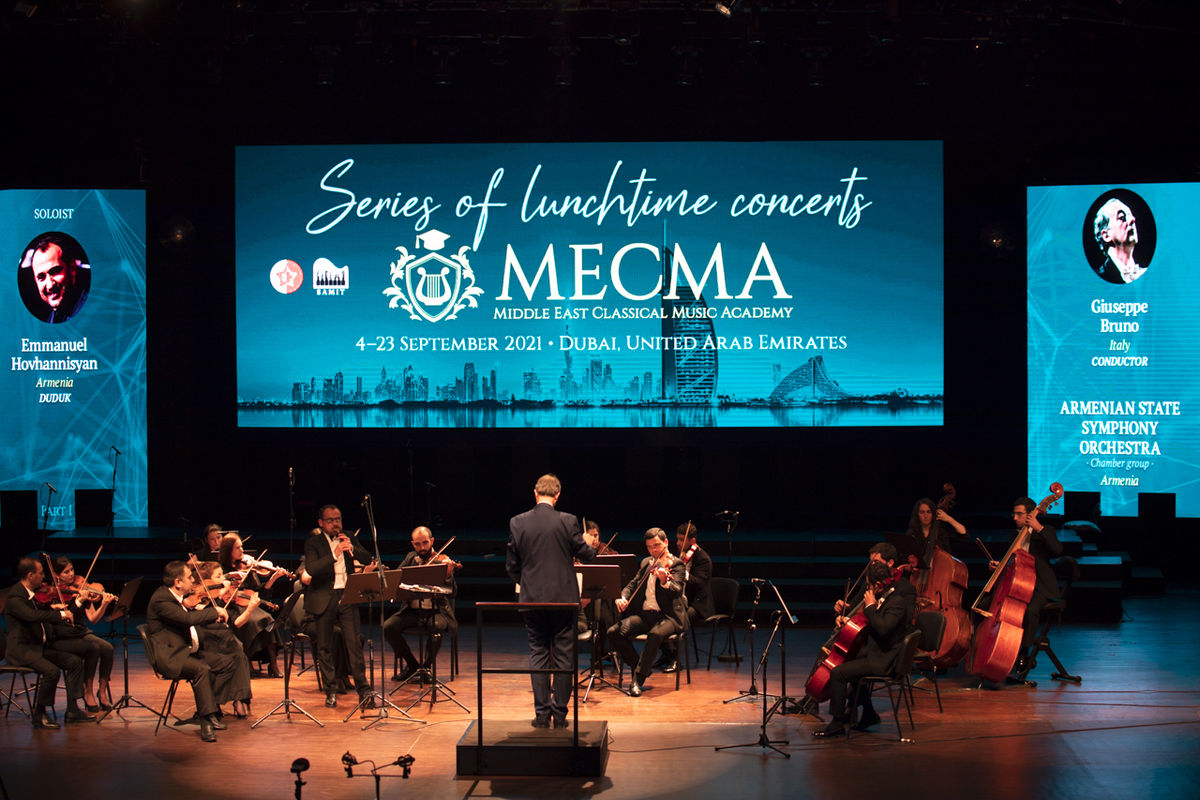 The Middle East Classical Music Academy (MECMA), organised by the European Foundation for Support of Culture (EUFSC) and SAMIT Event Group, has officially launched, with the first masterclasses taking place on 4th September at the 5-star Jumeirah Zabeel Saray resort in Dubai. Running until the 26th of the month, the MECMA will comprise three weeks of classes, lectures, and seminars in the schools of piano, wind, and strings, along with a series of daily lunchtime concerts featuring internationally-acclaimed soloists, orchestras and conductors.

For more than a decade the EUFSC has been at the very forefront of classical music education around the world, organising a multitude of academies, masterclasses, lectures, seminars, conferences, and round-tables in various countries with the aim of expanding the reach and appreciation of classical music to all corners of the globe. Now, as the world continues to rebound back from the ravages of the Covid-19 pandemic, the EUFSC is seeking to expand its educational projects to a new region of the world for the first time – the Middle East. In addition to the dozens of masterclasses that will be taking place, the Academy is also be presenting a series of daily daytime concerts which feature appearances by many celebrated soloists, including Sergei Dogadin (Russia), Maxim Rubtsov (Russia), Graf Mourja (Hungary/Russia), and Andrey Baranov (Russia), to name a few. Accompanying them, there are the Kaliningrad Symphony Orchestra and the Armenian State Symphony Orchestra, who are being led by a variety of distinguished composers, with names like Felix Korobov, Aleksei Niaga, Mikhail Kirchhoff, Conrad Van Alphen, and Arkady Feldman, all set to take part, among many others.

This concert series is also seeing the return of the EUFSC’s Young Classical Music Stars programme, which identifies talented musical prodigies from around the world and helps foster their continued development by providing them with occasions to gain valuable experience and exposure. Many of the prodigies currently on this programme, including Elisey Mysin (Russia), Ivaylo Vassileev (Bulgaria), Zahar Vnutskih (Russia), Sofia Leifer (Denmark), Ivan Bessonov (Russia) and Leia Zhu (UK/China), shall be featuring in this Academy, presenting concerts alongside the orchestras in live performance. Crucially, the MECMA shall also be offering a unique opportunity to the most skilled Academy students, with a number of them being hand-picked by professors every day and invited to take to the stage side-by-side with the professional musicians, at the Jumeirah Zabeel Saray’s spectacular MusicHall.

“Music education is one of the most important things that the EUFSC dedicates its time and effort to, because if young musicians around the world are not given the tools and opportunities which they need in order to improve themselves then there will be no classical music stars of the future. It is for this reason that I am so proud to witness the arrival of the first edition of our Middle East Classical Music Academy, which is bringing a whole new level of classical music training to this region. I hope that all our attendees will grab this opportunity with both hands and take as much as they can out of it, and I am sure that all those who are with us shall be left with long and enduring memories as they take this next step along their musical journey” – Konstantin Ishkhanov, President of the EUFSC.

The Middle East Classical Music Academy launched on the 4th of September and is currently underway, running until the 26th of September. For more information, please visit the official website here.