Yesterday at the MECMA: Flute Concerto with Jasmine Choi

Yesterday the MECMA welcomed celebrated flautist Jasmine Choi, under the baton of conductor Oliver Weder, for the Academy's daytime concert. Masterclasses and lessons continued throughout the day. 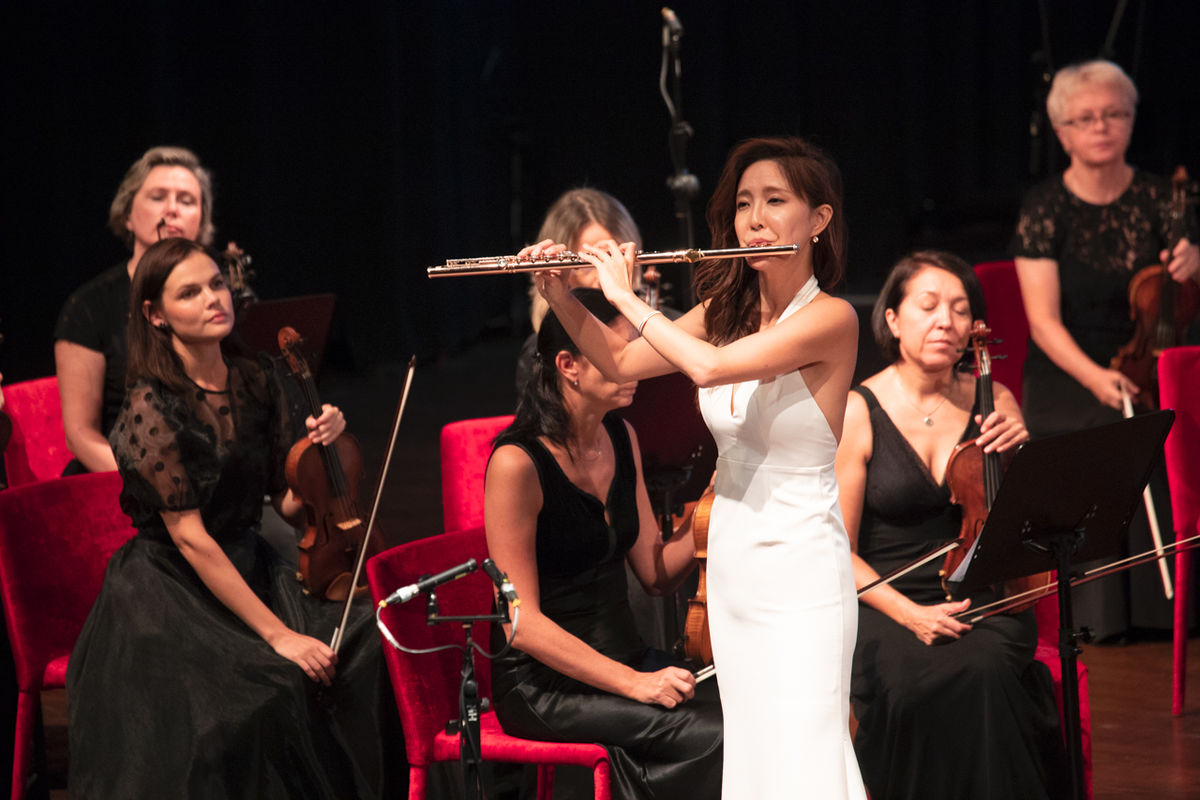 Svetlana Makarova
- “I really like the whole concept of the Academy, I like that students get a unique opportunity to play with an orchestra, perform on stage in front of an audience on a par with world-class soloists. The concert in which the students I studied with performed has just ended, and I can see the progress they have made in just a few days.”

- “My colleagues who work in neighboring classes are all amazing leading famous teachers. And to gather them all in one place at such a difficult time for the entire music world is a huge job. Such a community of high-class musicians, teachers and students is very inspiring. I admire the level of master classes, students who came from Europe, America, Russia, Korea, etc.”

Jasmine Choi (soloist)
- How was the concert experience? “For me it was such a long-awaited concert, because, after the pandemic, I actually have been playing quite a lot of times in Asia — in Korea and Taiwan, and so on — and at the same time I didn’t have concerts in Europe or the States, because it was all postponed. I’ve been waiting for this particular concert for a really long time, and I think it’s beautiful that we get together in person, see each other, make live music together and it’s so international. We’re in Dubai, with a Russian orchestra, and I came from Korea myself, living in Austria now, working with a German conductor. I get to meet a lot of international musicians, it’s really beautiful, this is the essence of music."

- How was the experience with the orchestra? “It was my first time playing with them, and I actually rehearsed with them yesterday as well, and it was surprising because they were so, so musical. Normally, when I play a flute concert, it’s quite new for them — it’s not one of the main violin or piano concertos — but, because of that, I was a little bit afraid of how the orchestra would react, but they were very happy and eager to play this concerto with passion. I told the music director yesterday that this orchestra can play so beautifully with such a great sound, even from the first rehearsal, and, of course, today was even better than yesterday.”

- You performed works by Mozart and Alexey Shor. What are your thoughts on this programme? "You know, this Mozart ‘Andante’ is a well-known piece, but not often performed because there are two other flute concertos, and also flute and harp concertos, so people would rather play these. This particular piece is really special for me, as it’s the very first piece I learned after learning this instrument. In terms of the Shor, I love to have the composer in attendance when I perform a piece. First of all this is a really beautifully written piece, and secondly I loved working with Alexey Shor because he’s so open to working with new ideas. When I suggested something more natural for the flute, or more effective and will sound better this way, he was always very positive, and I think this is the beauty when you play a new concerto: you can always ask the composer, they’re alive, and we can take advantage of that. We had great fun, and Alexey Shor’s compositions in general speak to everyone’s hearts, and it’s not something that makes you want to get out of the hall, you want to keep listening to it."

- What is your opinion on doing the concert here in Dubai? “I love it so much, it’s very admirable how Dubai has developed in the last few years. It’s becoming even the centre of classical music, people from all over the world are making classical music here in Dubai, and it’ll only get better and bigger, and I would love to come back to Dubai anytime.”

Oliver Weder (conductor)
- Can you share your views on the concert? “This concert is something special, because we had a world star, flautist Yasmin Choi, in the first section, and young participants of master classes in the second. They took to the stage with a symphony orchestra, and not with a student repertoire, but with great famous romantic masterpieces-concerts by M. Bruch and F. Mendelssohn. It was interesting for the audience and for all of us, and every day the orchestra plays concerts, I am amazed at their efficiency. I was very pleased to work with the orchestra, with Yasmin Choi and young violinists. It was a wonderful concert.”

- How did the orchestra perform in your view? “The Kaliningrad Symphony Orchestra is in great shape! We performed a piece by the composer Alexey Shor, which is also not the simplest, and the orchestra coped with it perfectly. I am sure they did a lot of preparatory work at home, because it is impossible to study and rehearse such an extensive program in such a short time.”

- How have things been from an organisational perspective? “I think that the European Foundation for Cultural Support has organised a fantastic project with master classes and concerts, because the only chance in our profession to achieve success is concert practice. The sooner a musician begins to go on stage-both solo and with an orchestra, the sooner he will overcome the fear of performing, he will learn to interact with the orchestra, with the conductor, this is very important.”