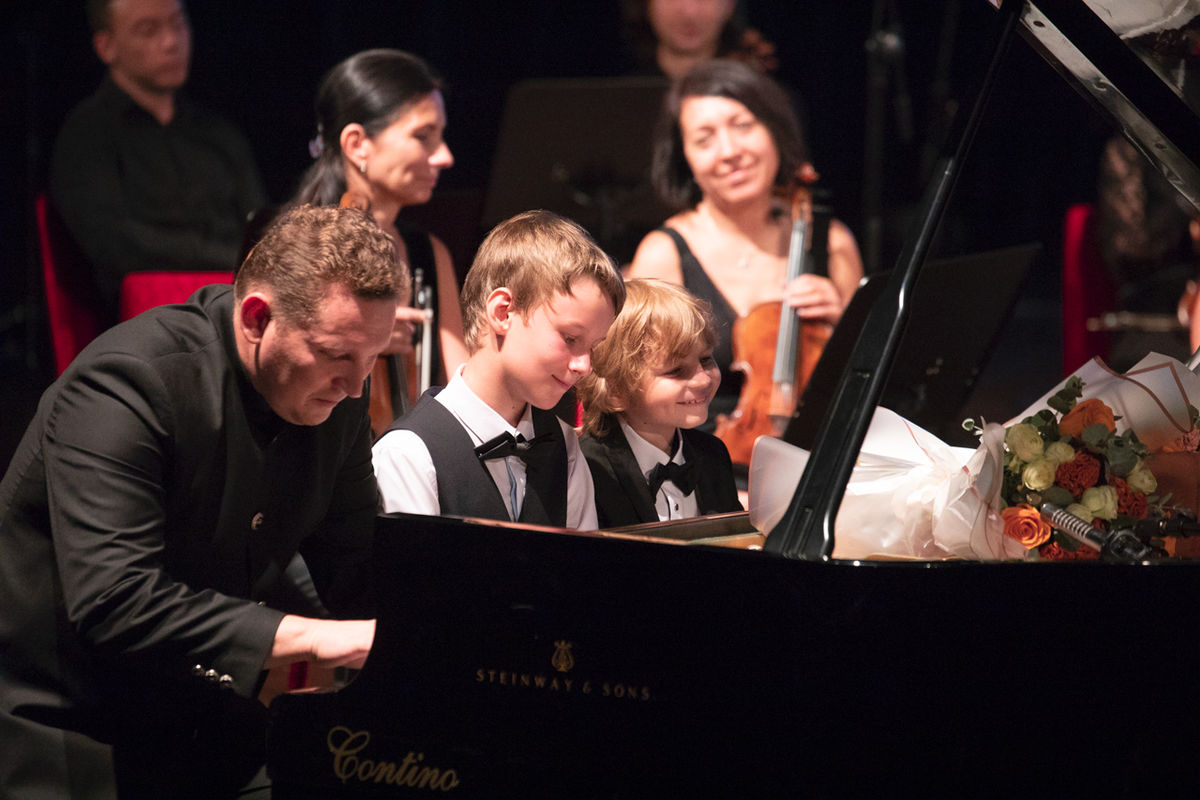 - “The experience was very nice. He’s a very talented student. He did a lot of the things I was requesting and I thought it was very productive. Organisation was just perfect which was very nice. I think the structure of the Academy, with lessons and then having the students also play in front of people – it’s very important to play in front of people – I think that that’s perfect. I’m all about bringing music to everybody, to as many people as possible. I believe that music saves lives, so I think it’s important for young people to make music and that they’ll be better people for it. Music is also great for the way our brains work, so it also helps brain function. It can only do good.” — Richard Paley

Elisey Mysin (piano)
- "Today I performed a work by the composer Alexey Shor, the first five movements of his suite 'Childhood Memories'. I like the second part of "Blooming May" most of all, it is beautiful and interesting. I like such melodic works. I also played the 2nd and 3rd parts of Mozart's Concerto No. 23. We had a big rehearsal, the conductor helped us a lot and prompted us. But I have already performed a lot with symphony orchestras and I never worry before going on stage"

Zahar Vnutskih (piano)
- How are you enjoying yourself here in Dubai?
“I really like it here, it's fabulously beautiful. I've never seen such beauty!”

- What did you perform at the concert today?
“Today, Elisha [Mysin] and I played Alexey Shor's suite 'Childhood Memories'. There are 14 parts in it. I played the last four parts. We played the last one together for an encore. I also performed Mendelssohn's Concerto No. 1. I liked the fragments of Alexey Shor's suite that I performed: "Naivety", "Adolescence", "Melancholy", "First love". "Melancholy" is so calm and thoughtful, somewhat reminiscent of Bach, the same polyphony…. The conductor Mikhail Kirchhoff is very good, I liked him very much, he is kind, sociable, but strict to the orchestra. I could see that he liked Elisey and me. And we also really liked him, I really want to play with him again.”

Do you get nervous before going on stage?
- “It happens, but I tell myself that I play in order to please people. You need to perform in such a way that you like it, and the audience likes it. If you worry too much, it gets in the way. I know how to handle it.”

Mikhail Kirchhoff
- How is your work going here in Dubai?
“This is probably the most intense tour of the Kaliningrad Symphony Orchestra in my life, because concerts are held every day. Every day there are new notes, new soloists — and so on for 18 days. I am glad that brilliant soloists — adults and children — play with us. It is always interesting to work with children in general, especially with such talented ones, because they are very sincere. Everything they do, they do with all their heart, they rejoice. I have three children myself, and I know how to, and love to communicate with children. It seems to me that we performed well and will continue to represent Russia with dignity at this wonderful festival.”

- What is your response to the repertoire you performed today?
“We have already formed a fan club of Alexey Shor in the orchestra; there are guys who especially fell in love with the music of the Composer-in-Residence. They plunge into his works with great pleasure and study new scores. The most important thing about Shor's music is that it is available to a large circle of listeners. I have already played quite a lot of Alexey's works, but still not all of them. And now, during the rehearsals, I have already met everyone, and for musicians this is a new discovery, a new composer, a new creative turn, everyone likes him.”